Portrait of a producer

How long have you been a beet producer?
I’ve been growing red beet since I settled in Saint Benoît sur Loire in 2006: about 10 hectares of red beet every year, which represents close to 20% of my farming land. Since one hectare produces about 60 to 70 tonnes of saleable beetroot, my yearly harvest of red beet is close to 650 tonnes. I also grow cereal, rape and another vegetable, carrots.

Is there a genuine red beet tradition in the Loiret?

Absolutely, but right now I’ll only tell you about red beets, for there is another kind of beetroot also grown in the Loiret: the sugar beet, which for its part is white, and which is grown more in the northern part of the department, particularly in the Beauce, close to the sugar  refineries. The red beet tradition goes back to the period following WWII, when many farms in the Val de Loire around St Benoît sur Loire had ovens to cook the red beets and then to sell them on the markets. Some farms developed their business, to the point of reaching an industrial stage. That is why our processing companies all have a farming origin and have maintained very close links with the local farming community.

Is red beet production a demanding business activity? Do you need a special kind of soil?
I would rather call it a technical activity, requiring real know-how. To begin with, it is especially well suited to the sandy soil we get in the Val de Loire, and which must be prepared carefully prior to sowing. We use the mound cultivation technique. When growing the crops, one has to properly control weeding to prevent any competition between the beetroots and the weeds, also known as self-propagating. Accordingly, we combine various techniques, like hoeing the spaces between rows. Occasionally, farmers will walk among the plots with a hoe to pull out the weeds found in the rows and which have escaped the weeding programme.

Lastly, the harvest is especially delicate, for the idea is to handle the beets with extreme care so that the vegetables do not get knocked about. Then the beets are cooked straight after being harvested, or else they are stored so as to supply the processing plants throughout the winter and up until the following spring. There too, great know-how is required to maintain quality, both in terms of taste and nutritional value, throughout the preservation process.

Could you describe the various stages in production?
Sowing takes place from February to March for the early crops (July/August), in April for summer beets (August/September) and from May to early June for the preserved beets that will be harvested in September/October. Seedbed density depends on the sowing date and on the desired calibre. Beetroot seeds are actually cymes containing several seeds. 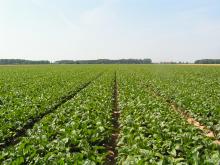 Growth lasts from 120 to 160 days, including an initial foliage development phase, followed by an expansion of the root. That is the phase during which we take care to provide all of the mineral elements required for its growth.  Lastly, during maturation, the leaves deteriorate to the benefit of the root which gets loaded in sugar, one of the main quality criteria in beets.

Generally speaking, every intervention we perform is reasoned and traceable.

Traceability and environmental friendliness?
Yes of course; thanks to our being set up as a business sector and to the ADIB, our inter-professional association, for the past 15 years we have been funding applied research programmes in a bid to constantly improve our production techniques, with two priorities: product quality and environmental friendliness. At the initiative of the producers, a technical advisory department was founded with help from the Loiret Chamber of Agriculture. Every step I take when growing crops is reasoned and systematically entered into a cultivation log. Besides, I am also certified according to GlobalG.A.P stipulations* by an independent agency.

Lastly, there is total traceability from the field to the consumer’s plate, thanks to the close relationship and control methods that exist between producers and processing companies.

How do you go about selling your beets? Do you have a contract?
Naturally, all of my production is under a yearly contract with one of the local processing companies, which defines quantity, pricing and the delivery period(s). Relations between producers and processing companies are highly stable, which is evidence of the maturity of our sector.

You are also Chairman of the Loiret Red Beet Producers Association. What is your role as such?

That’s right; my role is to represent the college of producers within our inter-professional association. I am very attached to this sector approach which we succeeded in setting up. It has helped us create and maintain true group dynamics, to find solutions to our problems, which are always changing especially on a technical level, and to promote our business sector together.

*“GLOBALG.A.P. stipulations were primarily designed to reassure consumers about the way in which food products are produced on the farm, by reducing to a minimum the harmful effects of farming on the environment, by reducing the use of chemical inputs, and by ensuring a responsible approach to health and to worker safety, as well as to animal well-being.”
Source: www.globalgap.org